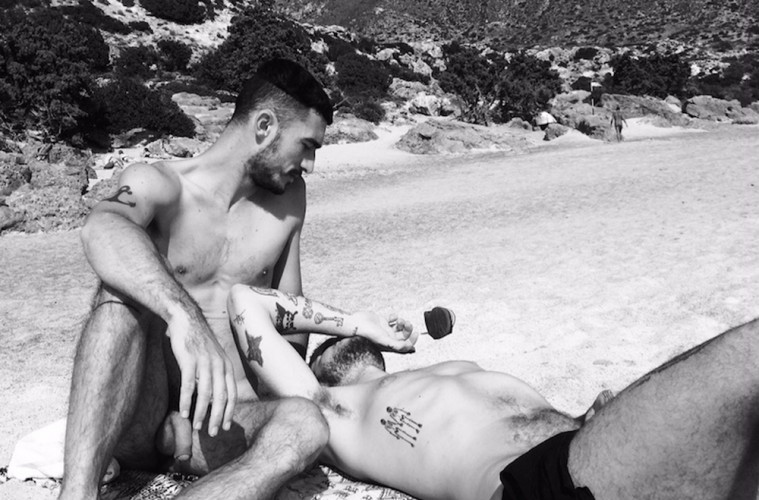 Konstantinos Menelaou wanted to be a filmmaker because he couldn’t live my life as he wanted, he had to create new worlds in order to feel comfortable in them and say the things that he otherwise wouldn’t be able to. It was a way to communicate, so he wouldn’t be lonely. He’s inspired by so many things around me: conversations with his friends, independent people, nature, sunshine, cinema and jazz music. We speak to Konstantinos about his latest film, ‘He Loves Me’.

‘He Loves Me’ examines suburban life versus life in nature, and how this contradiction can affect a gay couple. The characters come from a bad place of insecurities, vices and excess and find themselves somewhere beautiful and quiet where simplicity, peace and beauty engulfs them. How they react is dependant on the level of corruption they have been subjected to when living in the city.

The idea came together after a painful break up. I finally started to realise how it all works and what it all means: childhood traumas and their side effects, relationships that fail in exactly the same way, failure to communicate in a healthy way with other people, sex addiction, drug addiction etc. For the first time I felt like I ‘got it’ and I didn’t want to repeat the same mistakes. I wanted to talk to others, get their opinion and get help in order to understand life more. It was then than I realised that I might have a story to tell that could interest others. I wanted and needed to start a dialogue.

The industry standards have always been a bit scary for me, huge sets with hundreds of people running around. My approach is more personal and artistic, which I didn’t think was a valid way of making a film at first. Then I read ‘Cassavetes on Cassavetes’ and his words not only put my mind at ease, but celebrated a personal and unique way of making a film, which I related to. He kind of gave me the permission to work on my own terms. So in the case of ‘He Loves Me’ it was a long process of talking, writing, rewriting and reevaluating. For the actual shoot we were a small crew, we all liked and appreciated each other and respected our insecurities and flaws. There was no judgement and no criticism and I believe this atmosphere allowed us be creative and free. We enjoyed every second of it, despite the fact we had to carry around all equipment ourselves, the sun was incredibly hot and sometimes we didn’t have food and water! It was an adventure, and an experience I will never forget!

It’s an unusual film, there is a certain structure to the story, however the actors Hermes and Sanuye, play themselves to some extent. They are a real couple in a relationship that resembles very much what I had in mind when I wrote the film. They interpreted my script according to their own relationship, and together we experimented to see where this went, so when we were shooting they were improvising based on my guidance. Their experiences inevitably comes to the surface, so the outcome is their real responses to the questions I posed.

When queer films are about real issues that concern real needs, then they find their way to successful distribution and they have an audience. However, there is a lot of self indulgent junk out there that aims to perpetuate the idea that manic sex is a source of knowledge everyone shouldÂ posses. Those are the ones that fail because this notion is false. Sex doesn’t offer much. Love is what they should be focusing on. That’s the message of the film ‘love is everything’.

He Loves Me (2018) – Official Trailer from Konstantinos Menelaou on Vimeo.