Andrew Logan – The Art of Reflection

At the age of 19, I did the opposite of what most young homos do. I left the big city and moved to the country to study art. Suddenly this thoroughly urban boy was set free in the natural wilderness that is Dartmoor and I couldn’t get enough. At any given opportunity I would head out into its wild landscape, often with my easel and paints, and sit for hours on end, absorbing its natural beauty. Each visit presented something new, from the lush, vibrant green new vegetation in the spring, to the golden hues of dying grasses in late summer evenings, the earthy rich burnt reds and ochres of the autumn bracken, through to the muted grey mystical mists of the winter. Occasionally the experience was heightened by the ‘magic’ mushrooms which grew in abundance between granite boulders on its rolling hills. Being there informed my work and gave me a connection to rural England that my urban childhood had missed. 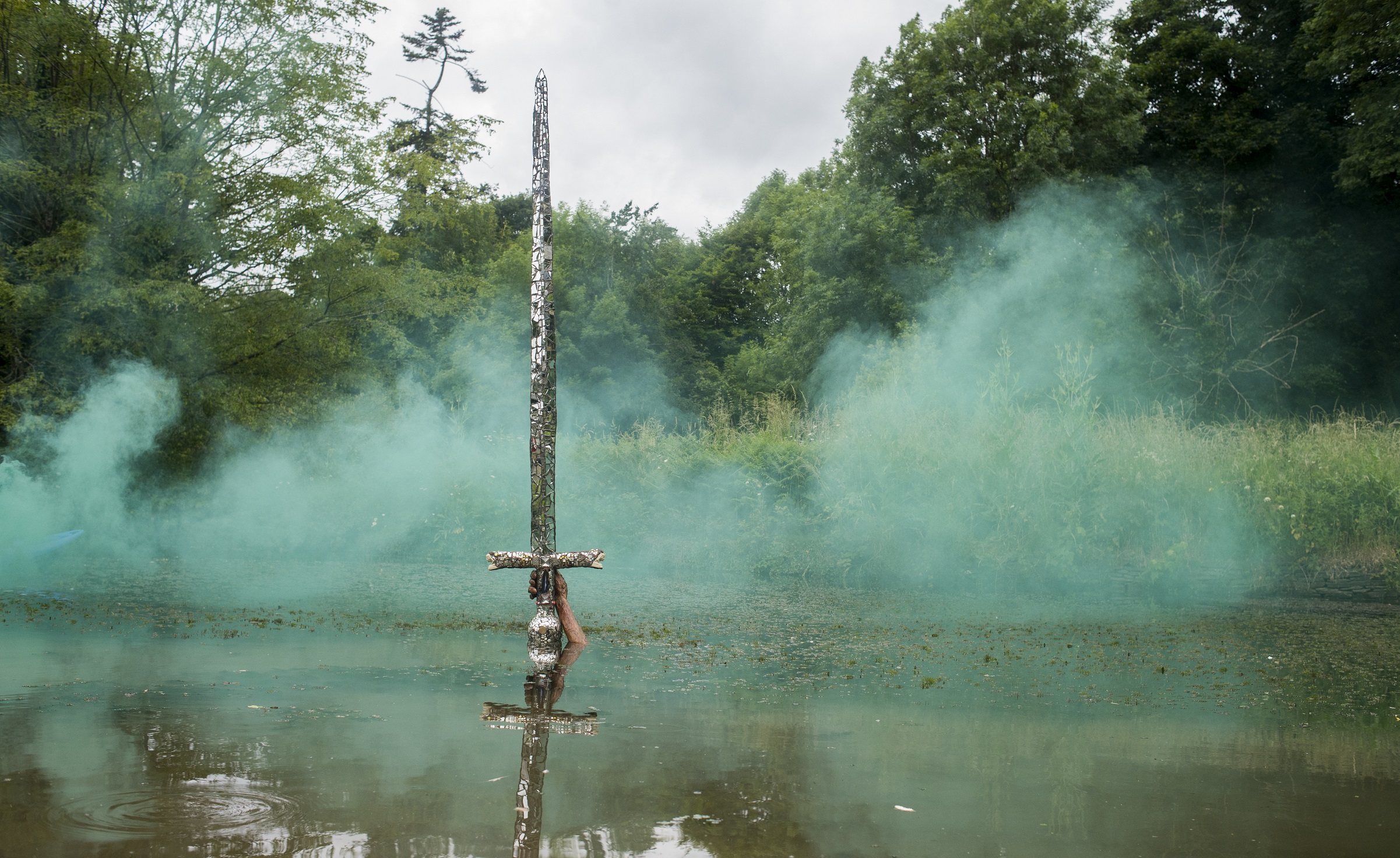 With each visit, my love of Dartmoor deepened. I began spending my weekends with my new friend and fellow art student Susanna who’s family home was the palatial 16th Century Cider House at Buckland Abbey. Looking back now I realise how incredible and unlikely an experience it was for a kid from a council estate in South London. Susanna and her lovely parents took me under their wing and encouraged me in my art. They allowed me to gain an intimate knowledge of the area and explore the grounds and history of the magnificent Buckland Abbey at my leisure. 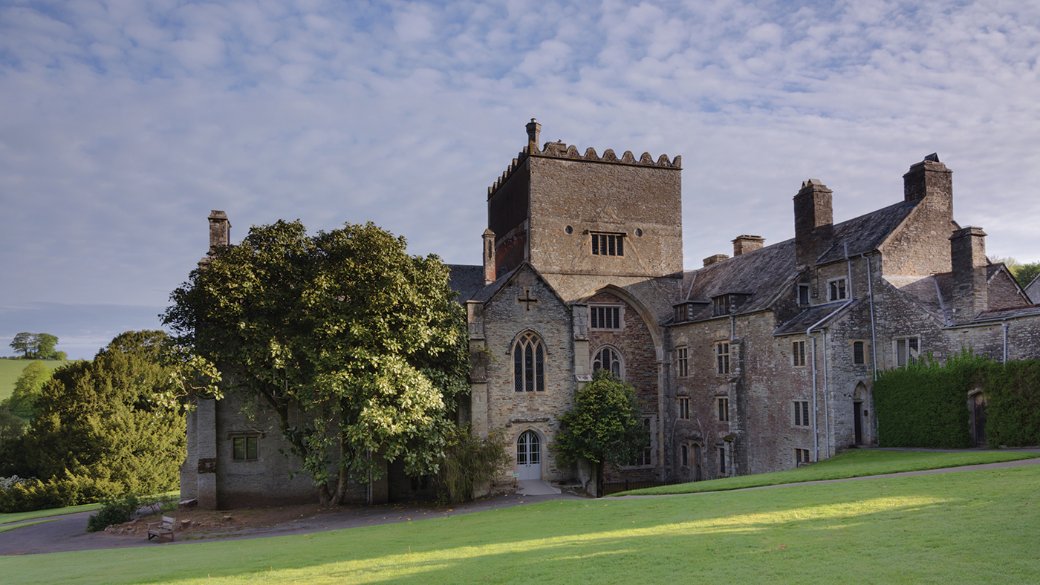 The abbey was built some 700 years ago and was the home of the famous Elizabethan sea captain and privateer Sir Frances Drake. It has an air of mystery that all very old buildings have. Walking around the grounds in the middle of the night, as we inevitably did on the walk back from the local pub, it took no imagination at all to see ghostly figures on horseback appearing out of the mist or a sword rising from the moonlit waters of the Cart Pond. So it was of little surprise to me that the most theatrical of England’s remaining ‘Stately Homo’ artists Andrew Logan would choose it as the site of his major retrospective exhibition The Art of Reflection. 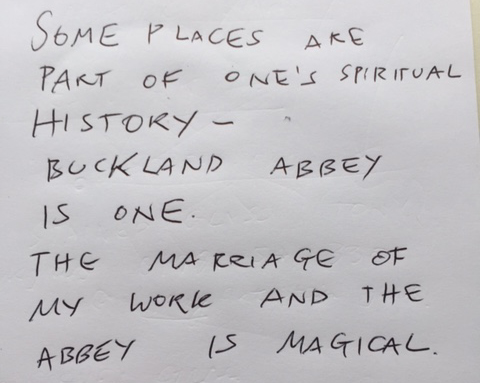 I have been lucky to meet Logan on a few occasions over the past few years and an audience with him always fills me with a mixture of respect and inspiration. He has the look of a high priest or wizard in his colourful bejewelled clothes yet exudes the genuine warmth of a beloved school teacher. Joy and creativity pours out of him forming into intricate, multilayered, highly-decorative 3-dimensional art works. Like manifestations of spells made up of nature, mythology, and magic in his own unique style. 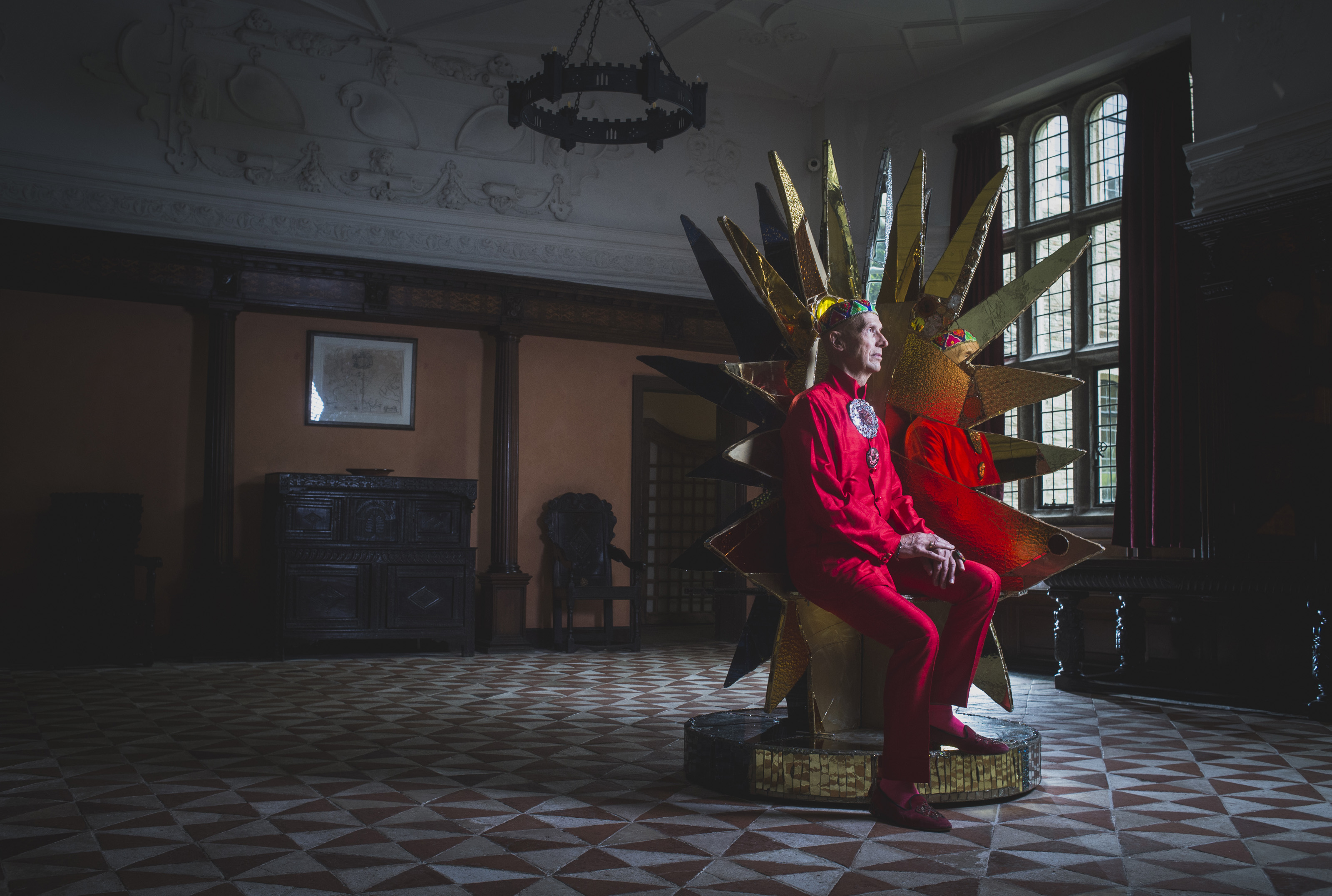 Andrew Logan with his sculpture ‘Universe Throne’ part of ‘The Art of Reflection’, at Buckland Abbey.

The Art of Reflection features 18 sculptures selected from five decades of Logan’s spectacular career, placed throughout the house and gardens. Forming one of the largest ever exhibitions staged by the National Trust in collaboration with a single artist. Exploring themes ranging from discovery, tranquility, nature and the universe. 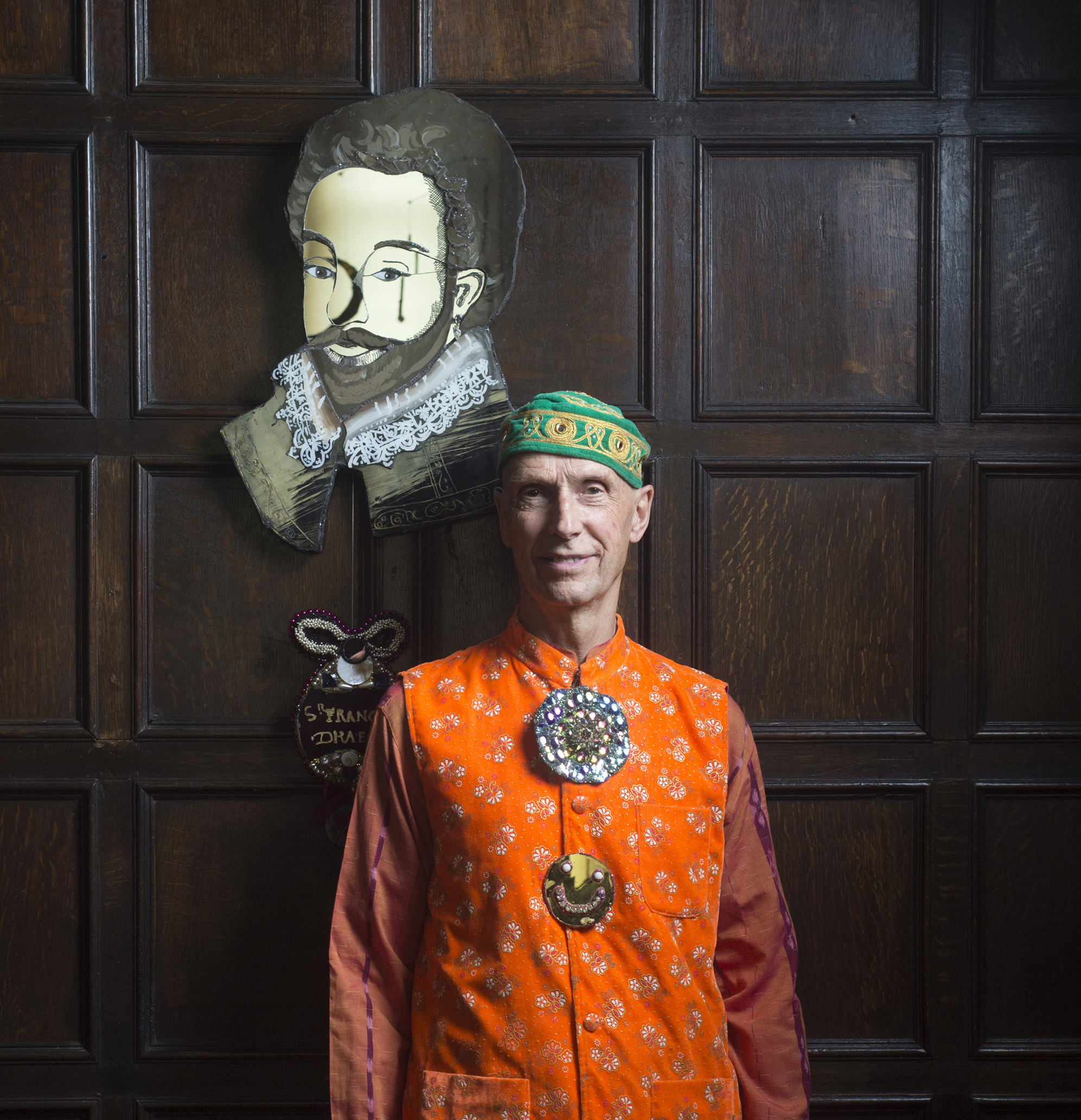 A major attraction is Logan’s new jewel and painted glass portrait of Sir Francis Drake, Buckland’s most celebrated owner, and Goldfield, one of his earliest public commissions from 1976. The giant installation fills Buckland’s Great Barn with 4.5-metre high wheat stalks, field mice, and floating butterflies. Another highlight is World of Smiles, a hanging globe in Drake’s Chamber, echoing his circumnavigation of the world, and the never previously exhibited Life and Oomph, Logan’s life-size sculpture featuring Royal Ballet principal ballerina Lynn Seymour. Buckland’s gardens are home to Logan’s Four Flowers of the Apocalypse, a floral tribute to the abbey’s atmospheric setting and Excalibur, a 3-metre glass sword rising out of the abbey’s Cart Pond. The abbey’s dining room is transformed by Logan into an installation titled Dinner with Andrew Logan and Friends featuring artworks by his friends Duggie Fields, Jennifer and Christine Binnie, Richard Logan and Dame Zandra Rhodes. 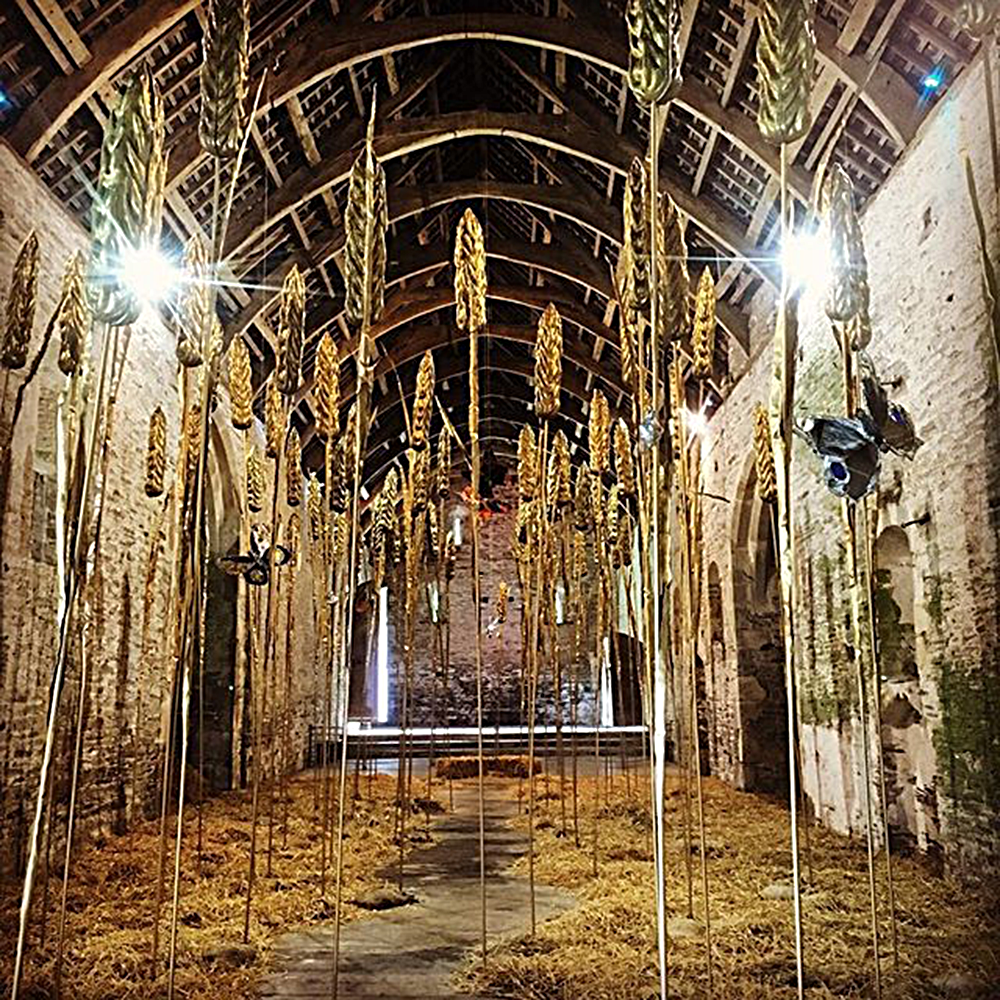 The Alternative Miss World event which Logan conceived and has run for over 40 years are represented by the ornamental Elements and Universe thrones on which the competition’s winners have been crowned. Visitors are able to try out the thrones for themselves in the Great Hall which has historically welcomed noblemen and dignitaries throughout its colourful history.

Buckland’s volunteers have been given specially created pieces of ‘apple’ jewellery to wear in celebration of the abbey’s 700-year-old history of apple-growing and cider-making. Other pieces from Logan’s Heritage Jewellery collection are displayed alongside historic artifacts in the abbey’s collection.