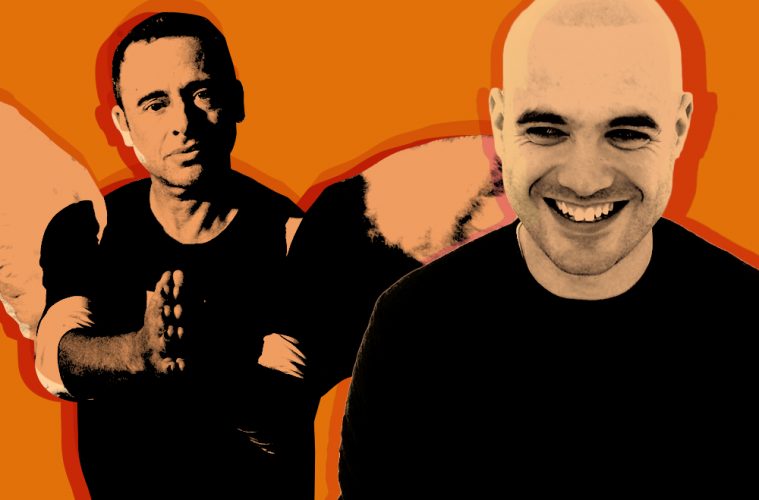 Theatre producer and activist Jeremy Goldstein talks to playwright and agitator Stephen Laughton about Truth, Power and what it means to be queer, Jewish and outspoken in modern Britain…

Jeremy Goldstein: Tell us about you?

Stephen Laughton: I’m a queer Jewish-Greek-hybrid-political-writer-kid from the Midlands. Generally haunting the less fun corners of my social media or researching the crazier conspiracy theories (Flat-Earth/Alien Disclosure/the Titanic-slash-Olympic switch) or reading celebrity gossip in CDAN or in my office with my Cocker Spaniel working on my latest TV-slash-film-slash-theatre project.

JG: Anything coming up we should know about?

SL: Two things are pretty imminent-next week, you’ll find me on stage again for the first time in about a decade – I’m appearing in Truth to Power Café at the Roundhouse in Camden, and then after that we start rehearsals for my new play.

JG: Tell us about the play?

SL: One Jewish Boy is a bittersweet tale of inherited trauma, raging anti-Semitism, the end of youth and staying in love… It explores key moments over a disastrous four-year relationship against a tide of prejudice. It’s a not-quite-polemic on the steep rise of anti-Semitism over the last couple of years; that for a number of reasons – What-about-isms/Lack of emerging Jewish writers/the conflation between Diaspora Jews and Israel etc bore etc – no one seems to be tackling.

It’s my first non-Queer play too, which has been a really interesting dynamic. Gender politics became increasingly significant in a piece that that on one side asks if the fear of hatred, could be even worse than hate itself…and on the other attempts to quantify the price of that hate… Is the value higher if you’re a man, a woman, black, Muslim, Jewish etc…?

Essentially though, it’s a fucked up love story.

JG: As one queer Jew to another – how do you cope with the rise in anti-Semitism and homophobia?

SL: Since the announcement, I’ve been getting it from all sides. I’ve had anti-Semites attacking me for blowing up Palestinian babies. (For the record I have never/will never/don’t ever want to blow up Palestinian babies) Along with the standard ‘Jew’ nonsense – Israel and money etc (which if you saw my bank balance you’d find laughable). I’ve had right-wing Jews calling me a left-wing-snowflake-self-loathing-Jew-Corbynista who enables blood libel. I’ve lost a producer, a ton of funding – and then on the flipside I’ve met genuine support, respect and encouragement. Mainly from the people who have actually read it – Jews and non-Jews noting how it resonates, feels important, is timely. Last week was tough, but ended on a high-after losing half of my funding, an unexpected donor stepped in. Thankfully we can scramble on.

Anti-Semitism is multi-faceted, and works on a number of layers – placingthe Jewas a parasite in some canards whilst simultaneously reviling the all-powerful despot in others. So writing this play is my coping mechanism, is my way of trying to unravel all this. I recently left the Labour Party-I can’t support Corbyn anymore, and I’m a romantic-not-blanket Zionist-but this government, the blockades, settlements, one-nation laws and brutality against the Palestinian people has to stop. I want to start an open and honest conversation. I hope it works.

JG: What do we say to anti-Semites and homophobes when they justify their comments as free speech?

SL:When you say a thing, you make it so – words are that powerful and will always resonate somewhere. So, that ‘harmless’ off-hand, comment soon snowballs into a falsehood, a fear, a hatred, an intention, a deed. Anti-Semitism. Then before you know it we’re dealing with Kristallnacht Part-Two. And we don’t even have Free Speech in the UK, because we have hate crime laws.

There’s real fear that this, whatever this ‘chapter’ unfolding is, could be the start of the next thing. Every 70-years or so, someone comes to try and wipe out the Jews. It’s been 73 since the end of WW2.

JG: Is there a time in your life when telling the truth, or standing up for yourself had a memorable impact on you?

SL: I’ve always had an independent spirit and a ‘fuck you I won’t do what you tell me’ attitude. Which hasn’t always been my friend…Things were really fucked up for me as a teen so I’ve always had to look after myself. On one hand it gives you an entrepreneurial streak, on the other it means there have been times where you’re constantly battling uphill. I do not come from ‘means’… so basically the only currency I’ve ever really had is the ability to stand up for myself whilst trying to do the right thing.

JG: Who has power over you and what do you want to say to them?

SL: There is quite clearly a violence in all of my work, I have tried to fight it, but I can’t. This violence was beaten into my soul. There was abuse, both sexual and violent in my youth. I was hospitalised, taken out of the family home. I have been sometimes more, sometimes less successful in how that affects me. I’ve always tried to keep my sense of adventure, my smile, and my optimism on the front-foot but this fury is a driving force. It has powered me – but I’ve come to realise lately that this fury is not some kind of inner propulsion system of mine. Sure, I’ve learned how to harness it, but actually what I need to do is turn to face it, say, ‘I acknowledge this,but it’s your hate. Not mine’. So, I‘m giving it back tohim. By engaging, explaining, then forgiving.

I have no idea what that looks like yet, and I’m terrified about how it will feel. But enough is enough – and much like the hate we see because of our religions, genders, sexuality – or whatever is targeted actually – I think it’s time to say enough is enough.

It’s time to move on.

One Jewish Boy will run at the Old Red Lion Theatre, Islington, from December 11 until January 5. Book here.
This website uses its own and third party cookies. To continue browsing we consider you accept the use of these cookies.
Accept