Homoculture’s Bj McNeill  is in Berlin and talks to queer photographer Lukas Viar, one of 8 Berlin based multidisciplinary artists featured in Exhibition № #2 showing at Eight Rooms Gallery.

Scattered throughout the images illustrating gender fluidity & experimental fashion are shots of friends taken at political protests, music festivals and in backstage areas pre and post show. These offer a more Nan Goldin style intimacy that communicates the relationships within the queer community beautifully.

Exhibited amongst the meticulously placed rows of Polaroids are larger scale portrait pieces. These feature drag queens Georgie Bee, Yoko Fomo & Hungry. The picture of the latter shot on a Hasselblad camera is otherworldly. Through the contrast & composition Viar captures the dark and animalistic nature of this enigmatic queen perfectly.

Work like this can often feel egotistical but these shots don’t. The cross section of queer culture documented reflects a diverse community beyond the photographer. In a world where everything is so conveniently “instagrammable” it’s refreshing that these photographs feel more suited to the pages of a magazine or collection book than on the scrolling feed of an app. What the audience is left with is a truthful, expansive and direct comment on queer culture.

I sat down with Lukas after the exhibition opening to chat about his work.

Bj: Lukas, how was opening night of the exhibition?

Lukas: It went really well! I was super exhausted but the space was almost exactly as I had hoped and people reacted very positively towards the work.

Bj: The response to your work was hugely positive. Why do you think people are drawn to it?

Lukas: I think my images are very direct. Think they offer a perspective that most people don’t have access to and the subjects are very beautiful.

Bj: Your work features solely queer culture why focus on this?

Lukas: I guess because it’s my culture. This is a world I inhabit. It would be illegitimate for me to focus on depicting communities I was not a part of. I also have work that falls outside of this bracket but for this exhibition I thought I’d focus on the queer stuff.

Bj: What inspires you most about this culture?

Lukas: The people who are the most extreme unapologetic versions of themselves.

Bj: Your portrait of drag queen Hungry is delicious! Tell me something about it.

Lukas: This was taken at Bushwig in Berlin, backstage. It was a weird week and I’d just been fired from my cafe job. So basically I was in between jobs and didn’t really have enough money to be shooting film, but I had four shots left on my Hasselblad which I took to Bushwig. I only took one picture of Hungry and I don’t think I could have been happier with the result.

Bj: What’s something misunderstood or unknown about your subjects that you feel your photographs help communicate to your audience?

Lukas: I think it’s important for people to realise that beneath these larger than life characters there are human beings who deserve the same level of care and respect as anyone else.

Bj: What’s the importance of documenting nightlife and club culture for you?

Lukas: I think documenting nightlife is important to me because it has been a big part of my life. Many of the people in the community find a haven in this place in society because they are celebrated for being different rather than penalised. This is a part of nightlife that I am attracted to I think. 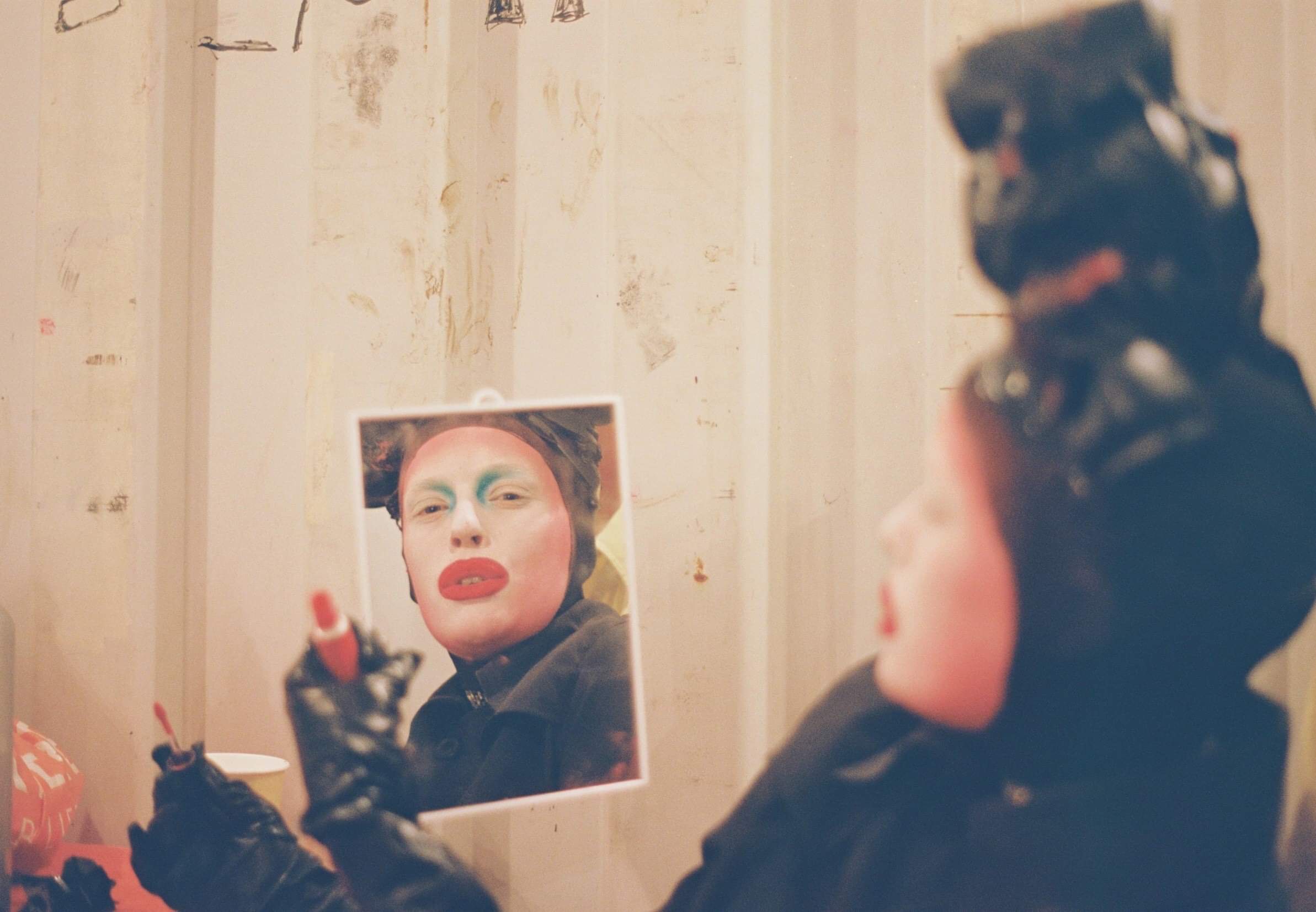 Bj: How do you feel about drag becoming mainstream in part because of the artistic and media documentation of it?

Lukas: It’s a big change and it has many impacts. I think on one hand it makes drag safer by making it more relatable to the masses, on the other hand it also gives people a preconception of what drag should be; that can be difficult for performers who don’t fit these ideas. I guess there is also a fear that more alternative types of drag based performance will be euthanised by people wanting to book people from the TV or social media.

Bj: A lot of your shots were taken in dressing rooms or backstage and expose the real backstage beauty of performers and drag queens that a lot of people aren’t privy to.

Lukas: Yeah, I was in these spaces before I started taking pictures. I think I also like to work with people rather than capturing a moment that exposes them.

Bj: It shows. You get a beautiful sense of LGBTQ+ community, friendship and empowerment through these your Polaroids.

Lukas: I think all the work is done by the subject. This project is like a window into a world that exists, so all the community and friendship comes from there. I think the medium is good for an emotional catalogue of a place in time. I was partly inspired to continue the project by the book of polaroids from Fire Island in the late 70s, because of the way it conveys the emotion and the relationships.

Bj: You shoot with a Hasselblad tell me a little about that? Why that camera?

Lukas: I have seven cameras! I shot Hungry on that camera when I just got it as I wanted to professionalise my equipment. It’s a Hasselblad 500c/m. It’s a middle format camera, learning to use it has been really fun! The only issue I’m facing is that it doesn’t have a lightmeter so I have been guessing light levels by eye.

Bj: Two of the main photographs in your exhibition featured photographs of women in drag. Do you think there is enough focus on the women of drag culture?

Lukas: The prints of Emma and Georgie are very important to me. They are both some of the best drag queens I know. In there respective communities I think they do get some of the recognition they deserve but I think in drag as a whole women are vastly underrepresented. 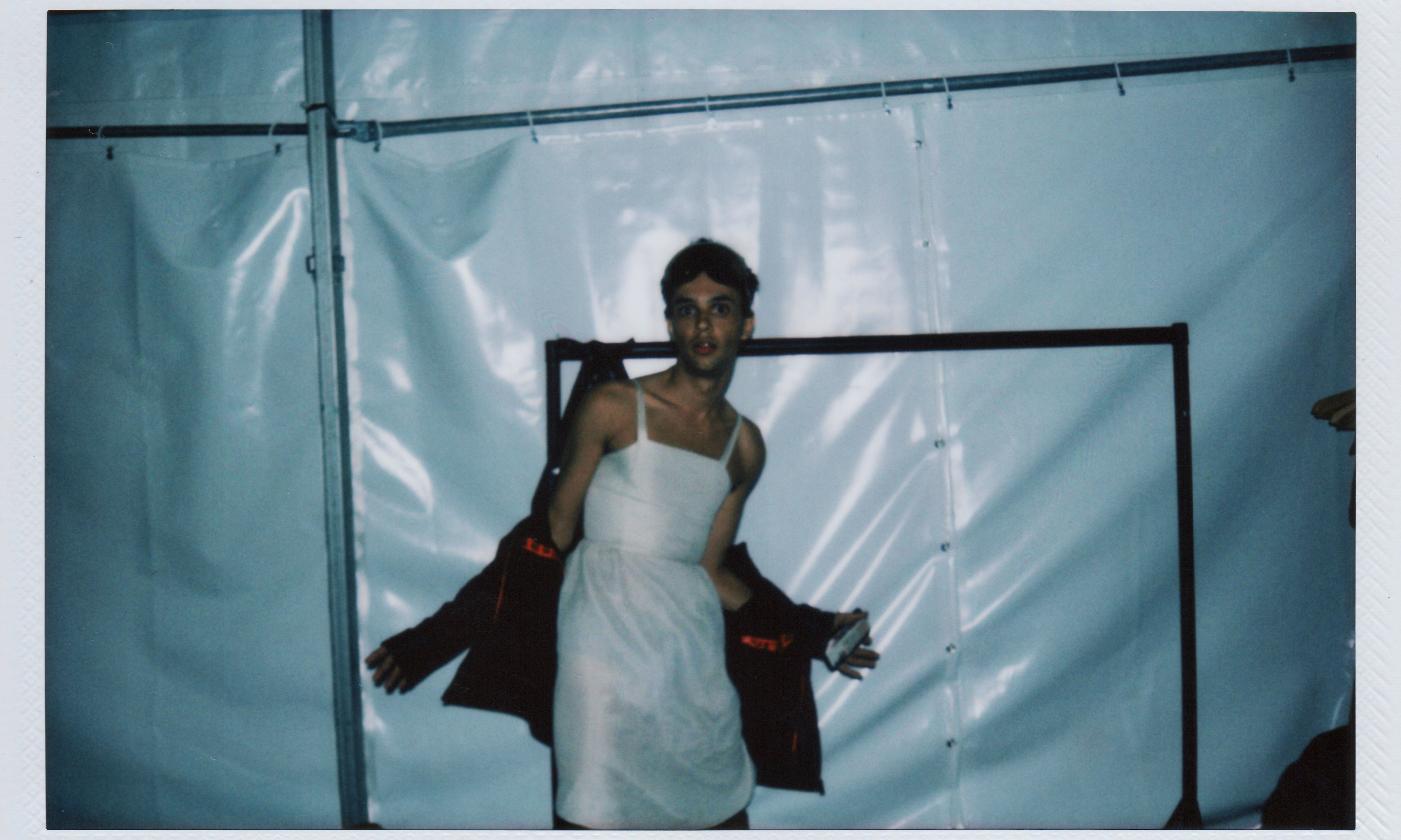 Bj: Lastly what’s your favorite photograph in the show?

Lukas: This is super difficult. I think I put 73 images up and every one has its story. But I think the print of Emma at Glastonbury was really special. The moment wasn’t staged and that container is a real mess. I love it when my images show the fantasy, it’s important to be reminded that it exists.

Bj: Lukas, thanks for your time!

Bj McNeill is a London based queer performer, writer and model originally from Sydney, Australia. Bj wrote, directed and produced the 5 star theatre productions, Torn Apart (dissolution) (2015) & LGBTQ+ political piece Flawed____like a b_y (2018). They also co-created and directed 5 star feminist piece Things That Do Not C(O)UNT (2018). BJ frequently works on queer & LGBTQ+ projects and also writes about and reviews theatre and the arts.